Coming to The Craig Gallery : Carol Morrison Paintings “Maritime Scenes – Over The Edge”

“The camera was my instrument of liberation. Now that I no longer had to paint on the run, I would pay each gut reaction its proper homage”

Please join us Wednesday, August 31st at 7pm to welcome artist Carol Morrison at the opening reception of “Maritime Scenes – Over The Edge” at The Craig Gallery. This show will be inspiring and truly a feast for the eyes – a must see!

“For the last year or so I have been trying to capture the drama of our maritime scenery in larger studio paintings. I am inspired by the way artists such as J.M.W. Turner and Winslow Homer portray stormy skies and seas. I work from plein air paintings and photographs resulting from memorable trips around Nova Scotia and Newfoundland.  I am reminded of Mary Pratt’s comment “The camera was my instrument of liberation. Now that I no longer had to paint on the run, I would pay each gut reaction its proper homage”.
Carol Morrison’s interest in the natural world around her, which led to her career as a research scientist, also led to landscape, still life and portrait paintings. She is most influenced by the expressive brushwork of Tom Thomson. Carol has had solo shows in the Visual Voice, Swoon, Anna Leonowens, Craig, McCarthy and VANS Corridor Galleries as well as at the St John’s Art Centre and the Rossignol Cultural Centre. She has also taken part in many group shows, and her work has been chosen for juried shows of the Society of Canadian Artists and the Canadian Institute of Portrait Artists in St John, Red Deer, Calgary and Montreal, and at the Keenan Center in New York and the UNB Art Centre. In 2005 she graduated from NSCAD with a BFA degree and a major in Fine Art, and received the Elizabeth Greenshields Foundation Award for an emerging artist. In 2008 she was awarded a provincial creation grant for a project painting portraits of victims of injustice, using material provided by Amnesty International. “Portraits of Injustice” was shown at Pier 21 in 2010 and at several venues around Nova Scotia and New Brunswick.”

We hope to see you all there! 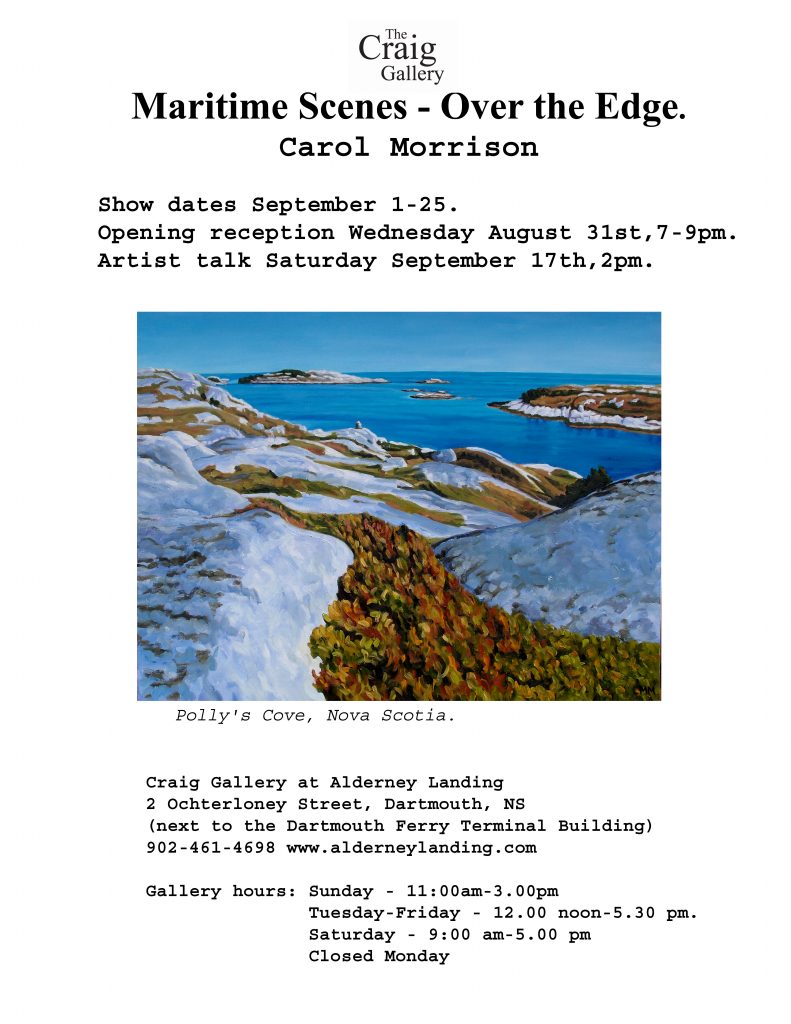 Lee Cripps is a professional creative working full time as an artist, arts administrator and parent. She is driven by emotion, aesthetic, spirituality, anthropology, and philosophy. You will see her photography and paintings in shows in Dartmouth, NS. You can find her on twitter @thecriptyklee